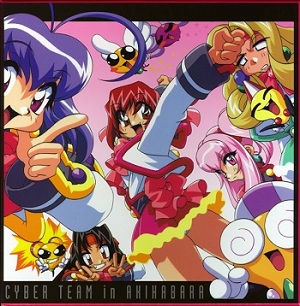 The main character is Hibari Hanakoganei, an Ordinary Middle School Student who dreams of getting her own Pata-Pi, the new fad toy. She is given one by her prince, whom she has previously seen in a dream, and calls it Densuke. This leads her to being attacked by Homunculi, which are controlled by a team of three young women, and protected by her Pata-Pi turning into a Diva - the Diva being a combination of Greek goddess and Powered Armor.

Soon she is joined by the other four members of the Cyber Team, each with her own Pata-Pi, thus forming a team to fight the Terrible Trio (the Sibyl Team) that opposes them.

Of course, there are more powerful forces behind the Sibyl Team, including the headmaster of their school who has links with the Rosicrucians.

Cyber Team in Akihabara has examples of: