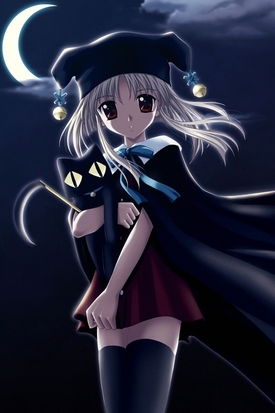 Suika is a visual novel by Circus, split into intertwined stories over a two week time period in a small village.

The first chapter stars Akira Kazuma and his return to the town where he briefly went to school. He meets a miko who turns out to be one of the two friends he made when he was living there. There are constant flashbacks detailing the time the two went to school together along with Itsuki's sister Sayo and the growing love triangle between them.

The second chapter is about Souji Kamishiro and the relationship between him and the local father and daughter artists Ritsu and Sayaka Shirakawa. Ritsu's art is rather disturbing and so is his normal manner. It also has an alternate route involving side character Mie Wakabayashi after the True Ending of the VN is achieved.

The third chapter is about the love triangle between Touko and the Misaka siblings, Akane and Yoshikazu. Touko is intensely devoted to Yoshikazu, but also extremely jealous of any of his relations with absolutely anyone else. Especially his non blood related little sister Akane, towards whom he has a secret attraction which isn't helped along by her rather suggestive behavior.

The fourth and final chapter is the one that finally returns to the first protagonist Hiroshi Inaba. The story also addresses the little silver haired girl with red eyes, black clothes and a small black cat doll. Who is she, and why does she keep acting so strangely when people notice her? And if she wasn't trouble enough, Hiroshi's father is dying and his sister has a potentially fatal heart condition and is scheduled for a surgery soon.