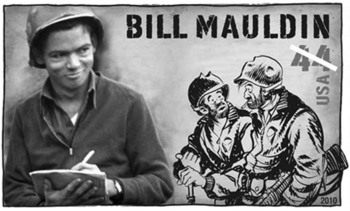 Mauldin and his most famous creations, honored on a U.S. postage stamp (2010).
Advertisement:

Bill Mauldin (1921–2003) was a Pulitzer Prize-winning American cartoonist, best known for his World War II cartoons featuring soldiers Willie and Joe (no, not that ones, these ones), which were originally published in The Stars and Stripes and subsequently collected in the bestselling 1945 memoir Up Front. After the war he worked as an editorial cartoonist and freelance writer and illustrator, and made an (unsuccessful) run for Congress in 1956.

In the 1980s and '90s, Snoopy visited Mauldin every Veterans Day to drink root beer. Around the same time, Mauldin was also one of the interviewees for The Good War