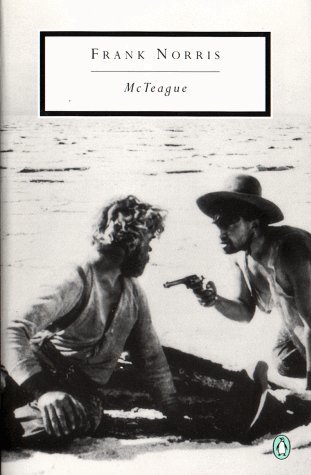 McTeague is a 1899 novel by Frank Norris, and is considered one of the best works of realism fiction. The novel centers around a simple-minded dentist simply called "McTeague", who lives in turn of the 20th century San Francisco. McTeague's life changes when he offers to operate on his friend's cousin, Trina Sieppe, on her broken tooth. McTeague and Trina soon become a couple, and plan to wed. Everyone's lives are then changed forever when Trina finds she has won $5,000 in the lottery...

McTeague is a realist novel famous for its Black-and-Gray Morality, and how the events unfold is seen as a natural event due to the environments surrounding the characters, a staple in realist literature. Its protagonists, men and women alike, are shown as both products and victims of a debasing social order.

It was also adapted in a movie, Greed, in 1924 by Erich von Stroheim. Von Stroheim intended to produce a complete adaptation of the book, with none of its material left out; as a result the film's original version lasted approximately ten hours. It was drastically cut by the studio, MGM, and most of the excised footage has been lost.