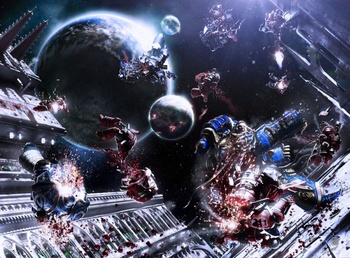 "Lorgar of Colchis. You may consider the following. One: I entirely withdraw my previous offer of solemn ceasefire. It is cancelled, and will not be made again, to you or to any other of your motherless bastards. Two: you are no longer any brother of mine. I will find you, I will kill you, and I will hurl your toxic corpse into hell’s mouth."
"If you truly do hail from the realm men once called Hell, when you return there, tell your kindred it was Sanguinius who threw you back!"
—Sanguinius, Primarch of the Blood Angels Legion, throwing Ka'Bandha into a Warp-gate, Fear to Tread

The Horus Heresy novels have taken great pains to tell us that the Heresy was the greatest tragedy of Warhammer 40,000. They also weren't lying when they said that it was "a time of legend".

4: The Flight of the Eisenstein

Book 4: The Flight of the Eisenstein

8: Battle for the Abyss

Book 8: Battle for the Abyss

30: The Damnation of Pythos

Book 30: The Damnation of Pythos

There's a reason why many consider this Nick Kyme's best book to date.
32.5: Wolf King

Book 36: The Path of Heaven

41: The Master of Mankind

Book 41: The Master of Mankind

The Horus Heresy: Siege of Terra

1: The Solar War
Novella: The Sons of Selenar
2: The Lost and the Damned
3: The First Wall
4: Saturnine
Novella: Fury of Magnus
5: Mortis