The characters of Noragami.

The titular stray god and the main protagonist of the series. Yato is a seldom acknowledged god who wishes to raise enough money to build his own shrine, thereby clawing his way into fame and fortune as Japan's most revered.

An ordinary middle school girl who has the unusual ability to see Yato. After nearly dying while saving Yato, Hiyori is left on the border between the human world and the afterlife, with her spirit frequently leaving her body. Hiyori is the daughter of a wealthy family and is a passionate fan of pro-wrestling. As of chapter 25 she's entered high school.

A young boy spirit who is enlisted as Yato's newest shinki (Divine Weapon). His weapon form is an odachi with a blade as white as snow dubbed Sekki. After becoming a Hafuri Vessel (Blessed Regalia), his weapon form has changed into a pair of katanas.

Tenjin and his Shinki 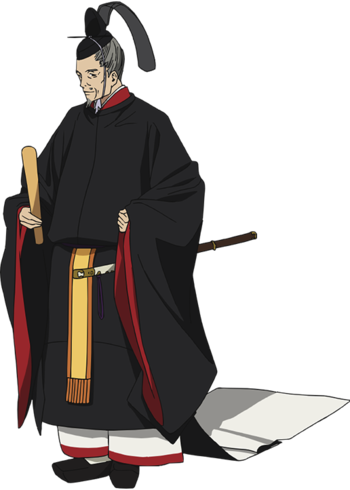 The famous God of Academics. He is often sought out, or appears before Hiyori and Yukine when his wisdom is needed. 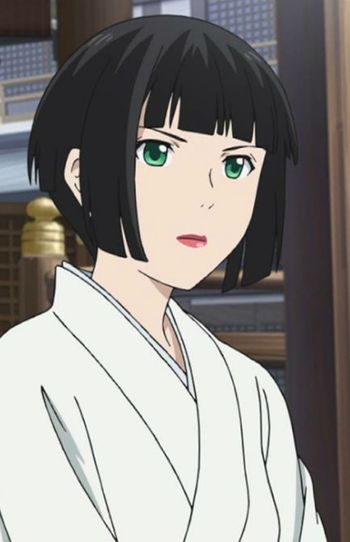 Yato's former shinki, Mayu left him after feeling he was doing a poor job of being a god. She currently serves the academic god, Tenjin. While serving Yato she was "Tomone", but has since discarded this name after being released. Her weapon form under Yato's servitude was a dagger. Under Tenjin her form is a kiseru smoking pipe. 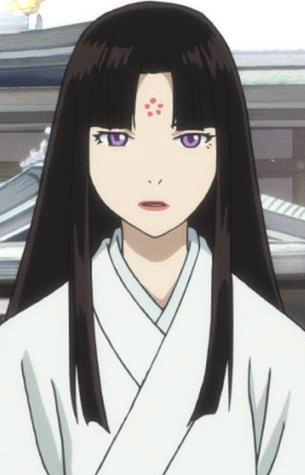 Tsuyu is the spirit of a plum tree who has lived with Tenjin for 1,000 years. She is not a shinki, but rather stays with Tenjin out of a lasting love.

Supernatural Is Purple: Her eyes eyes are purple to show her nature as a tree spirit.
The Tenjin Sisters 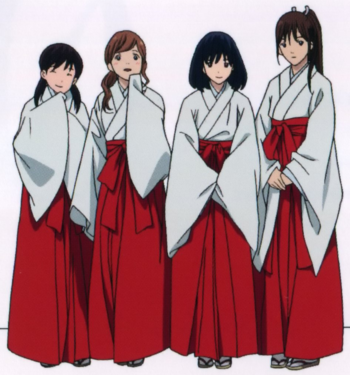 A group of miko who are actually his shinki. Initially four in number, they were reduced to three after one of them, Miyu, succumbs to an aftershock caused by Yukine's corruption, forcing her to undergo an ablution, be stripped of her name, and be banished from Tenjin's shrine.

Kofuku and her Shinki

The bubbly and energetic, but naturally irresponsible God of Poverty. Though she goes by the name Ebisu, a famous God of Fortune, Kofuku just uses the moniker to conceal her status as a poverty god.

Bishamon and her Shinki 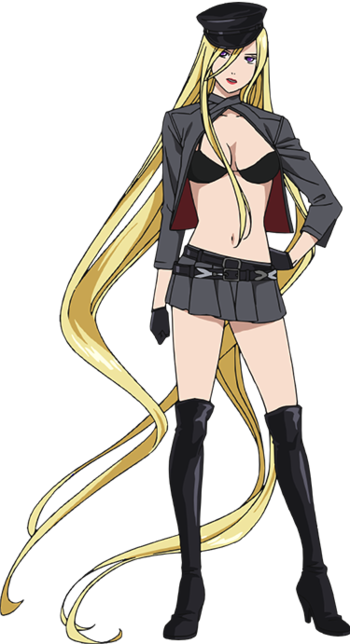 A God of War, among which she is considered the most powerful. She holds a personal vendetta against Yato for killing her shinki in the past.

One of Bishamon's shinki. He can take the form of a cherry blossom earring that allows Bishamon to analyze her opponents. After Bishamon is left critically injured at the hands of the sorcerer, Kazuma embarks on a quest for revenge and willingly becomes a Nora for Yato, given the name Kazune.

One of the many shinki that serves Bishamon. He takes the form of a large lion for her to ride on.

One of Bishamon's shinki who is a recent addition to her arsenal. She takes the form of the bikini battle attire. Her true name is revealed to be Yui Fukuhara.

One of Bishamon's shinki who make up her go-to arsenal. She becomes a whip. 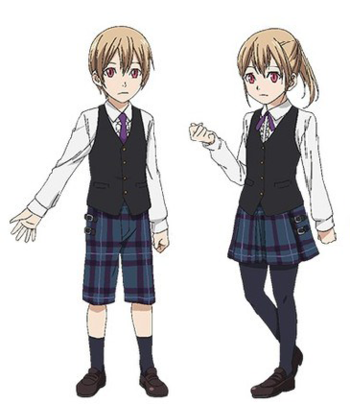 One of Bishamon's shinki who is initially jealous of Tsuguha, which Kugaha takes advantage of. She becomes a battle armor outfit when called on and was part of Bishamon's go-to shinki team until Tsuguha joined and gave Bishamon an outfit with more mobility. 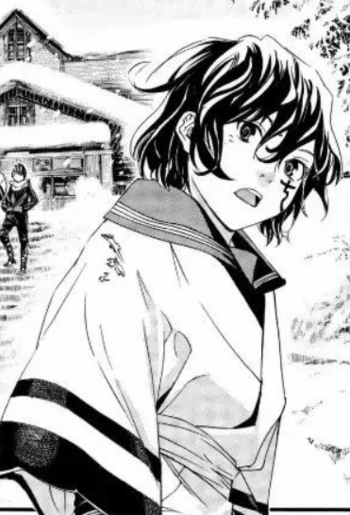 Bishamonten's newest shinki, more commonly known as the infamous Hafuru-mono (はふる者; lit. "the entomber"), is the Blessed Regalia who was sealed away for committing "a grave sin in order to protect its master" (according to Kiun) a very long time ago, to the point of becoming partially mythical. She was released by Bishamonten, who then proceeded to give her her name, becoming her new owner.

Ebisu and his Shinki

The deadpan God of Fishing and Commerce and one of the Seven Gods of Fortune. He has the highest reincarnation rate of any god due to his... unconventional hobbies.

During the escape from the underworld, Ebisu is killed by the Pacification Ring. He gets reincarnated as a little boy with no memories of his previous life. Since he was born recently, this new Ebisu is a naïve and well-mannered kid.

One of Ebisu's main battle shinki. He currently serves as Ebisu's lead shinki. He's technically a stray, though only through the circumstance of outliving his original master without having that name released, and so has great devotion toward Ebisu for being willing to take him in.

The Queen of the Underworld.

A god of thunder/swords. He was dispatched to kill Ebisu.

Yato's first shinki other than Nora/Hiiro. Before serving Yato, Sakura was Tenjin's shinki until she was dismissed. She was the one who shaped up Yato's current character.

A mysterious shinki girl wearing burial clothes that has some sort of history with Yato. She is a stray shinki ("Nora"), or a spirit that has formed a contract with more than one master and therefore has multiple names.

One of Bishamon's shinki, and her team's medical physician. Though he presents himself as kind and loyal to his god, Kugaha is anything but, intending to overthrow Bishamon and take possession of the War God's power. To reach this end, Kugaha has enlisted the aid of Nora.

An enigmatic entity known to Yato and Nora only as "Father." He holds great power over Yato. 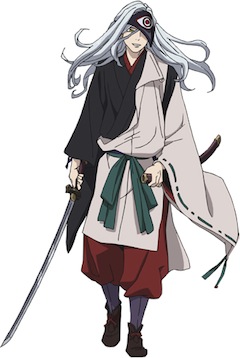 A mysterious and powerful God of Calamity. Rabou is said to grant dark wishes of people. His specialty entails killing ayakashi, people, and even Gods. He is one of the many Gods that employ Nora as a shinki.