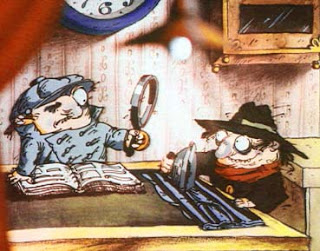 Our heroes - Chief in gray, Colleague in green.
Advertisement:

Investigation Held By Kolobki ("Следствие Ведут Колобки"; translit. "Sledstvie Vedut Kolobki") is a two-part Soviet cartoon written by Eduard Uspensky and directed by Igor Kovalyov and Aleksandr Tatarskiy - the first part coming out in 1986 and second in 1987. The plot kicks off somewhere in the USSR. Deep at night, the two investigators named Brothers Kolobki hear a loud thump, which they promptly dismiss as nothing. The next morning, they're staring dumbfounded at the four huge holes in their rooftop. The smarter of two partners, Chief (Шеф; translit. "Shef") figures out that the holes are actually elephant footprints. And sure enough, the local newspaper has an article about the disapperance of the rare striped elephant from the city zoo. Chief and his partner, literally named Colleague (Коллега; translit. "Kollega") embark on an investigation to find out just what is happening in their sleepy backwater city.

In 1988 the creative team formed an independent Pilot Studio. They had a falling-out with Uspensky and had to rename their iconic characters from "Kolobki Brothers" to "Pilot Brothers". In The '90s, a sequel in the form of six short cartoons was made, and in the late 1990s and 2000s, a video game series based off the cartoons was created, available on PC, iOS, and Android.