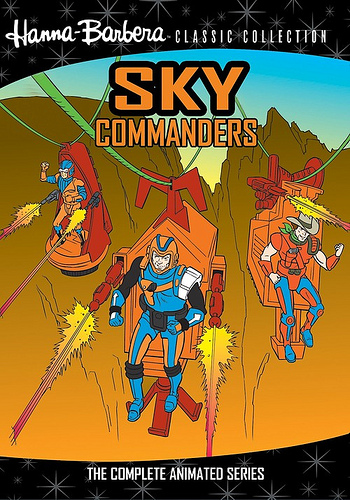 Left to right: RJ Scott, Mike Summit and Spider Reilly at work.
"Deep in the South Pacific, a tumultuous and untamed new continent has erupted, spawned by a highly unstable new element, known as Phaeta-7. If this powerful new element could be controlled, whoever possessed it would be the undisputed ruler of the world! One man, General Lucas Plague, is determined to hold that title. And it's up to a rugged team of mountaineering experts, lead by commander Mike Summit, to stop him. Employing revolutionary new gravity-lock and laser-cable technology to traverse the ever-changing terrain of the High Frontier, Mike Summit's Sky Commanders, and General Plague's Raiders, are locked in mortal combat, with the fate of the entire world hanging in the balance . . ."
— Opening Narration
Advertisement:

Sky Commanders was a Merchandise-Driven animated television series made by Hanna-Barbera that premiered in July 1987 as part of The Funtastic World of Hanna-Barbera, lasting for only thirteen episodes. It was based on a Kenner action figure line.

The story of Sky Commanders follows a diverse group of soldiers and experts from all over Earth, led by General Mike Summit, who battle the evil General Lucas Plague and his force of baddies, "The Raiders," whose aim is to Take Over the World. What's their plan? The series is set on a new continent deep in the South Pacific — "the High Frontier" — which was created by the discovery of a new, unstable radioactive element called Phaeta-7. This unusual energy can only be stabilized for containment by exposure to temperatures of 200 degrees below zero. Whoever could manage to harness it would be the ruler of the world; a goal that General Plague is dedicated to. It is up to General Summit and his crew to stop him.

As if things weren't already bad enough, the Commanders and Raiders would both have to routinely deal with lots of bizarre weather patterns, natural disasters, and horrifying, mutated creatures — all aftereffects of Phaeta-7's instability and the High Frontier.

Thankfully, travel throughout the High Frontier isn't a problem. You could either fly, or use "Laser Cables"; a specialized rappelling cord emitted from specialized backpacks worn by both forces. When used, the cables shoot out from the backpacks in the form of energy beams. When contact is made with a solid object, the Laser Cable solidifies into a solid metal cable line upon which travel is possible.