Film / Light in the Piazza 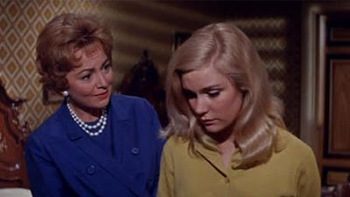 Light in the Piazza is a 1962 film directed by Guy Green.

Meg Johnson, a mid-forties married lady (Olivia de Havilland) and her astonishingly sexy daughter Clara (Yvette Mimieux) are touring Italy, and currently have taken up residence in Florence. Meg, a helicopter parent before the term was invented, is extremely protective of Clara and never leaves her side. She reacts very negatively when a handsome young Italian boy, Fabrizio Nacarelli (George Hamilton), notices Clara in the square and begins aggressively wooing her.

Eventually the reason for Meg's overreaction is explained. When she was a child, Clara was kicked in the head by a Shetland pony. She suffered some non-specific brain damage, and, as a result, has the mental state of a 10-year-old child, even though she's actually 26. Meg has made it a habit over the years of taking would-be suitors aside and telling them the truth about Clara, but due to his limited English skills (and the fact that he himself is not all that bright), Fabrizio does not notice anything amiss. Clara and Fabrizio's whirlwind romance soon gets very serious, leaving Meg with a major dilemma, wondering what to do.

Barry Sullivan shows up in the third act as Noel, Meg's husband and Clara's father. This film was based on a 1960 novella. In 2005 the story was again adapted, this time into a Broadway musical titled The Light in the Piazza.