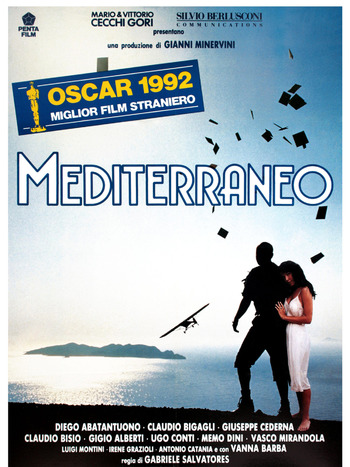 Mediterraneo is a 1991 film from Italy directed by Gabriele Salvatores.

, a flyspeck in the ocean that is said to be of absolutely no strategic importance. They're led by Lt. Montini, a schoolteacher in civilian life who likes to paint. His second in command is Sgt. Lo Russo, a macho, affable type. Among the rest of the little squad are brothers, Felice and Libero Munaron; Strazzabosco, who brought his donkey along and may like the donkey a little too much; and Farina, Montini's aide, who is quiet and sensitive.

The men are terrible soldiers. They fire at squawking chickens (which nearly gets Farina killed), they forget passwords, and mostly they just want to go home. The mission is four months of lookout duty, but no sooner are they dropped off than the ship which dropped them off is sunk by a British bomber. Soon after that Strazzabosco, in a fit of rage after his bumbling squad mates shoot and kill his donkey, freaks out and smashes the platoon's only radio. That rash act leaves the men totally come off, unable to leave the island or call for help. So they settle in for the long haul. Megisti is revealed to have its perks, which include a sexy shepherdess as well as Vasillisa, the even sexier village prostitute.