Recap / The Sopranos S 3 E 4 Employee Of The Month 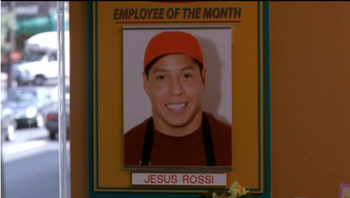 Tony gets a call from Irina one night, inquiring about her cousin Svetlana's prosthetic leg, which was stolen by Janice. Tony is more concerned that Irina would call his home phone out of the blue. Meanwhile, Dr. Melfi is shown to be back together with Richard La Penna, the father of her son whom she had previously divorced. Though they share an easy rapport, Melfi has little patience for Richard's constant concern about the public perception of Italian-Americans.

In Tony's therapy, Melfi returns to the possibility of ending their sessions and sending him to the next stage of his treatment in behavioral therapy. Tony bristles at the prospect and accuses Melfi of trying to pawn him off. She then proposes bringing Carmela into therapy, which similarly unsettles him.

Ralph Cifaretto attempts to bond with Jackie Jr., as he is now dating Jackie's mother Rosalie. When traditional attempts to relate to him are unsuccessful, Ralph brings Jackie along to strong-arm the brother of a mob associate who hasn't been satisfying Ralph with his kick-ups. The confrontation escalates, and Ralph and Jackie team up to brutally beat the man. This seems to thrill Jackie to an extent. Tony meets with Ralph the next day and, despite Ralph's expectations that he will be made captain of the former Aprile crew, Tony informs him the position will be given to Gigi Cestone. Ralph is crestfallen. Meanwhile Tony is surprised to learn that Johnny Sack and his wife Ginny have moved into a large home in New Jersey. Tony pays them a visit and gets Johnny's assurance that he won't interfere with how Tony runs his family.

While leaving her office one night, Melfi is attacked in the parking garage by a stranger, and raped on the stairwell, leaving her horribly traumatized. As she is tended to in the hospital, Richard and their son Jason rush to her side, both feeling impotent rage at the attack on her. They are informed that a suspect has been apprehended, and Melfi is put off when Richard reacts negatively to learning the man is named Jesus Rossi and likely Italian. Later as Melfi begins to convalesce at home, Richard calls the detectives working the case and learns that due to mismanagement of chain of custody, Rossi has been let off on a technicality. Melfi is horrified, and her mental condition is only made worse when, visiting a sandwich shop, she sees that her rapist is that shop's employee of the month.

Russian goons break into Livia's house while Janice is alone one night, striking her and forcing her to retrieve Svetlana's prosthetic leg from the locker where she's keeping it. Later Tony visits her in the hospital, and Janice seems to have undergone a total personality shift, with the supposed trauma of the encounter with the Russians leading her to become a born again Christian. Tony leaves, bemused, after promising to enact retribution on the men who attacked her - more out of duty than any actual desire for revenge.

Melfi has a dream in which her rapist attacks her in her office, only to be viciously mauled by an attack dog. Deconstructing the dream in therapy with Dr. Kupferberg, she realizes that it represents an unconscious desire to have Tony kill the rapist. In their next session, Melfi writes off her bruising and need for a crutch as being the result of a car crash, but shows clear signs of trauma. When Tony expresses a more open mind to ending their sessions and moving to behavioral therapy, Melfi reacts negatively and then begins to cry. Tony, clearly sensing something is wrong, comforts her, then asks if she wants to tell him something. Melfi regains her composure and simply says "No".