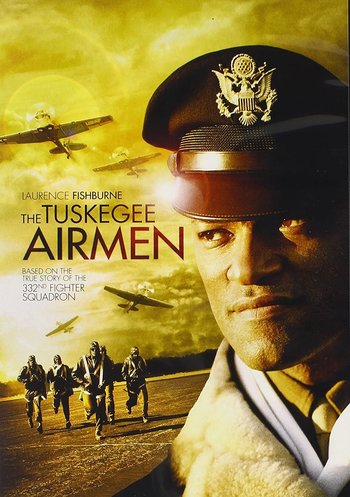 "As a United States Army officer who gladly puts his life on the line everyday, there's no greater conflict within me: how do I feel about my country, and how does my country feel about me?"
— Lieutenant Colonel Benjamin O. Davis, Jr.
Advertisement:

The Tuskegee Airmen is a 1995 war film made by HBO, and starring Laurence Fishburne, Cuba Gooding Jr., Courtney B. Vance, Andre Braugher, and John Lithgow, amongst others. It tells the story of the 33nd Fighter Group, better known as the Tuskegee Airmen, the first African-American pilots to serve in the United States Army Air Corps during World War II.

Compare with Red Tails, which is about the same fighter group.

The Tuskegee Airmen contains examples of:

Example of:
Hauled Before a Senate Sub-Committee