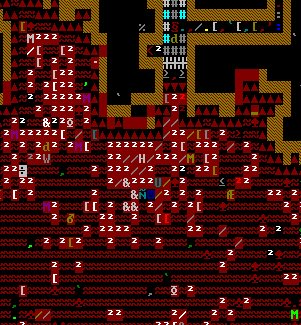 Welcome to Spearbreakers. Don't feed the zombies.
"And then the horror hits: This was just spring.
We are soooooooooooooooooooooooooooooo fucked."
— Splint
"Oh god, everyone in the fort is heavily medicated and boozed up just to deal with backround noise. That's a bit hardcore."
— Hanslanda
Advertisement:

is a Dwarf Fortress Let's Play conducted on the Bay 12 Forums. It began with the ambitious goal of being the first epic fortress of version 0.34, featuring the return of Syrupleaf's Spawn of Holistic and encouraging players to participate in storytelling.

What followed was a chaotic mess of mismanagement, hypercompetent management, Spawn getting stuck on ledges, hundreds and hundreds of mugs accidentally being produced for no reason, serial medical malpractice, zombie sieges of apocalyptic proportions, and lots and lots of story-based fiction, ranging in subject matter from a humble caravan guard accidentally averting the apocalypse to a convoluted science-fiction plot involving planeshifting agents of corrupt interdimensional research corporations and an extremist fringe group spearheaded by a megalomaniac trying to take them down.

The Fortress ended some time ago, mainly due to a crippling shortage of players able to take a turn (as everyone was either preoccupied with Real Life stuff or repeatedly dropped off the face of the internet mid-turn.)