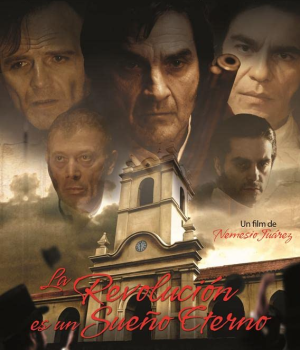 La Revolución es un Sueño Eterno (in Spanish, "The Revolution is an Eternal Dream") is a 2012 Argentine film. It is a historical film about Juan José Castelli, a political leader of the Argentine War of Independence.
Advertisement:

The movie begins in the last days of Castelli, when he had tongue cancer and faced a trial for the military defeats of his army. In dreams, flashbacks and descriptions during the trial, the movie features other events in his life: the British invasions of the Río de la Plata, his interview with William Carr Beresford, his defiance of viceroy Cisneros, the Open Cabildo of May 22, his appointment to the First Junta, the defeat of the counter revolution of Santiago de Liniers and his execution, the execution of Paula Sanz, Nieto and Córdoba, and his final defeat in Huaqui.