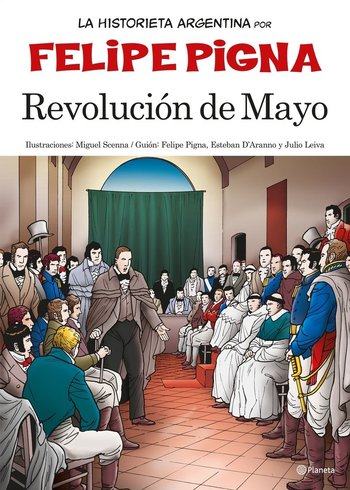 Revolución de Mayo is a comic book from Argentina, based on the events of the May Revolution, which kickstarted the Buenos Aires theater of the Spanish American Wars of Independence. It was written by historian Felipe Pigna.

Spain was conquered by Napoleonic forces during The Napoleonic Wars. Back in Buenos Aires, Santiago de Liniers, a French that became viceroy after the British Invasions, was resisted and accused of being allied to Napoleon. The Junta of Seville simply appointed a new viceroy, Cisneros. Cisneros allowed free trade, as ordered by the Junta, but this caused a conflict between merchants (who benefited from the contraband caused by the strict regulations) and ranchers (who could now export to the British). So he cancels free trade, to keep the support of the merchants, but a British admiral comes to protest about it.

Sevilla was conquered and the Junta was closed; Cisneros authority would be under question as a result. He tried to conceal the news, to no avail. Under military pressure, he called an "Open cabildo" where citizens would discuss what to do. It was decided to remove Cisneros and place a Junta instead, but he made a little trick: it would be a Junta led by Cisneros! This led to further protests and military uprisings until Cisneros resigned for good.

The Primera Junta took government, but it soon got infighting between Cornelio Saavedra and Mariano Moreno. Moreno resigns and goes on a diplomatic journey to Europe, but is poisoned on the way.