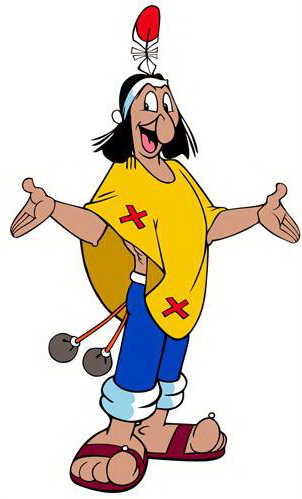 Patoruzú is an Argentine comic book.

The character was created in 1928 by Dante Quinterno, as a secondary character in a short-lived comic strip, "Julián de Monte Pío". He eventually left the publisher, but managed to retain the copyright of Patoruzu. He also created a character similar to Monte Pío, Isidoro Cañones, who remained a popular character since then. He also created new secondary characters: Ñancul, who manages his estancia, the Chacha, his step-mother, his brother Upa, his ugly sister Patora, Urbano Cañones, the strict military uncle of Isidoro, etc.

Patoruzú is a tehuelche, one of the indigenous populations of the Patagonia. He has super-strength, and an infinite ammount of money.

No new comic books have been made since 1984, but the comic books are still being republished to this day.