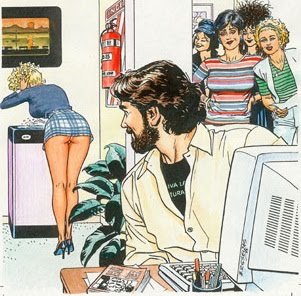 Here's a man who enjoys his work...
El Negro Blanco (in Spanish, "The Black White", for the name of the main character) was an Argentine comic strip. It was published by the newspaper Clarín and told the adventures of the "Negro Blanco", a fictional journalist of the newspaper. The story arcs involve some weird news report assigned to him (or a common one that goes weird) and his multiple romantic conflicts. A rational report going weird may be, for example, when he was sent to an interview, the girl he had left was sent by her own boss, they were both kidnapped along with the man of the interview and Negro's current girlfriend left him when he saw him with her on TV. A weird report: to drive a taxi the whole night, and write the multiple events that took place in that time.
Advertisement:

The Negro is torn between two hot women, Chispa and Flopi, unable to settle with either one of them. in the end, he is left alone. Other less sucessful women in his life were Susana, Caramelo, Agatha, etc.