Literature / How to Read Nancy 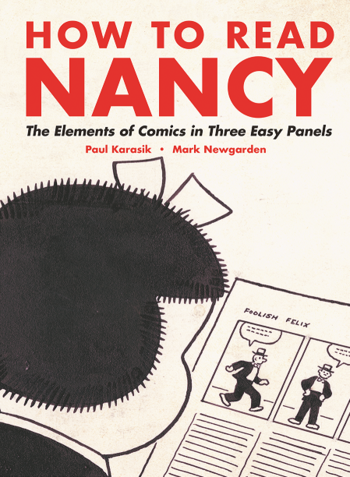 "DRAW, YOU VARMINT."
— Sluggo to Nancy (and others) in the 1959 comic strip the book analyzes.
Advertisement:

How to Read Nancy: The Elements of Comics in Three Easy Panels is a 2017 non-fiction book by Mark Newgarden and Paul Kasarik.

The book is an expansion of a 1988 essay written by Newgarden for the book The Best of Ernie Bushmiller, which analyzes the subtle creative process of the comic strip Nancy. The intent of the book was to not only be a biography of its creator, Ernie Bushmiller, but also to throughly analyze his creative process (and by proxy the language of comics) in exhausting detail, breaking down a single 1959 Nancy comic strip

◊ to show the sheer amount of thought and attention to detail he put into his "art of the gag" comics.

Compare to Scott McCloud's Understanding Comics, a book that similarly discusses the visual language of comics.

How to Read Nancy provides examples of: