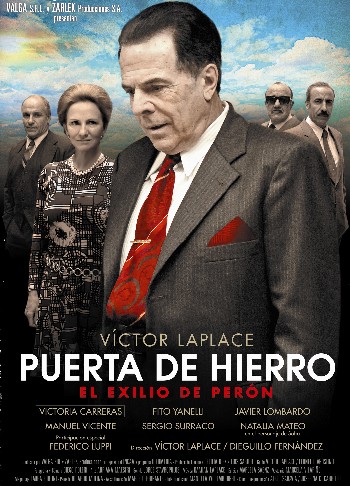 "And even if you didn't want the return, you'll always return to the first love..."

Puerta de Hierro (in Spanish, "Iron gate") is a 2013 Argentine film, Very Loosely Based on a True Story. It is about the long exile of former Argentine president Juan Domingo Perón. He was victim of a military coup in 1955 and left the country, he moved to other South American countries and finally to Spain, where he stayed for many years, until he was finally able to return in 1973. The actor playing Perón is Víctor Laplace.

The movie begins when Perón is about to return. By the narration of his memoirs he explains his long exile. He begins with the bombings in Plaza de Mayo and the military coup, and how he left the country after it. He met Isabel Martínez in Panamá, and later moved to Spain, always keeping a close eye on the events in Argentina. In Spain he also met Sofía (this one is a fictional character), he became friend of her without revealing at first that he was Perón, and shared literary interests and political ideas. He had meetings with several people from Argentina, such as union leaders, politicians, military, guerrillas, intellectuals, and Héctor Cámpora. He tried to return to Argentina through Brazil, but he was not allowed to leave the plane and forced to return to Spain. The second attempt, in 1973, was succesful.