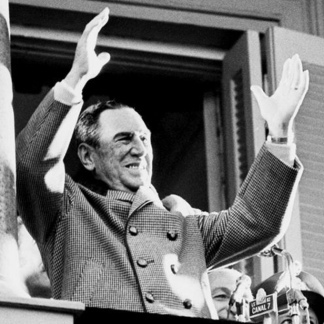 Juan Domingo Perón is a military from Argentina, who served as president for three terms.

After graduating from the military college he started his military career, and married Aurelia Tizón, his first wife. He helped to depose the president Hipólito Yrigoyen in the 1930 coup, but got reassigned elsewhere as a result of the military politics. Tizón died of uterine cancer in 1938, and the couple did not had any offspring.

He was sent to Europe the next year, to study the governments of the time. When he returned he wrote positive and praising reports about Nazi Germany and Fascist Italy, specially the later. He had great admiration for the ways the state controlled everything in those societies. However, those reports made no mention of The Holocaust, nor there is any known moment when he made reference to it (under either a supporting or rejecting view).

Perón created a secret lodge within the military, the GOU (Grupo de Oficiales Unidos). They made a coup against president Ramón Castillo; the new military government stayed neutral during WWII and only declared war to the Axis powers when Germany was already defeated and the victorious armies just about to enter to Berlin. From the Secretary of Labor and Social Welfare he started to outline his plans, banning several unions and replacing them with unions loyal to him. The province of San Juan had a destructive earthquake, Perón forbade all independent charity donations, channeling all the welfare support through the government. He met the radio actress Eva Perón at this time.

The other military forced him to resign, but a demonstration held on October 17 restored him to power. After his liberation he married Eva Perón. The military regime called to elections and Perón ran for president. Most other parties, fearing the surging of a local facist government, united in the Democratic Union. Even the American ambassador to Argentina, Spruille Braden, took an active role in the election, but Perón won anyway. It was the only case in the history of Argentina that a military dictatorship called to elections, took part in them and won.

Initially, there was a big prosperity, as the country made lucrative food exports to the war-ravaged European countries during and after the war. Eva Peron in particular was known for giving gifts to everyone, from dolls to sewing machines. Several things owned by foreigners, such as railways, were nationalized, and the international trade of agriculture productions were seized by the state. Alas, this prosperity was short-lived as a result of the populist spending. Inflation made a spectacular raise, so a few years later Peron started an austerity program. Unions

Perón did not tolerate political opposition: political leader Ricardo Balbín was jailed, academics that did not support him were fired from colleges, and newspapers were forced to tone down criticism or even closed or expropiated. The electoral law was altered, so that Congress had as many Peronists as if the party had had a 90% to 10% victory. Regular people were forced to join the party and wear its badge in order to keep their jobs. Public figures such as singers or actors had to either display a strong Peronist support or flee to exile. The educative system taught children to support Perón and Evita. Each October 17 was celebrated as a national holiday, and people were forced to attend it. However, Raul Apold crafted a propaganda campaign, based on the methods of Joseph Goebbels. This propaganda demonized the opposition to Perón and the state of Argentina before his arrival, and glorified him as a champion of the people, even attributing to him labor rights that existed since decades before.

Eva Peron died of cancer, and the economic crisis continued. Former allies of Peronism, such as unions, the Church and other factions of the army, began to turn against Peron. Conflicts escalated, with acts of violence on both sides, and Peron resigned in 1955. He left the country and sought asylum at several places, until he settled in Spain. Peronism was outlawed, but remained a strong political force in Argentina. By this time the Cold War was in full force in Latin America, with the Soviet Union gaining a beachhead in the Castro's Cuba, from which several insurgent armies were promoted all across the continent. Peron and the Argentine insurgents (Montoneros, ERP, etc) both benefited from each other. Perón had people weakening the military while he stayed in Spain, and the insurgents had the proscription of Perón as a convenient excuse for their activities (specially as years passed and people began to forgot about the Peronist years, that were increasingly idealized). The military finally allowed to held election with Peronism running in them, leading to the election of Héctor Cámpora. Campora and his vicepresident resigned, and Perón run in new presidential election, alongside his new wife, Isabel.

The alliance between Peronism and the insurgent forces came to an end. He ordered them to disarm and close, but they did not: Perón was not willing to turn to communism or join Cuba. Deluding themselves that Perón was being manipulated by his close friends, Montoneros executed unionist José Rucci, a personal friend of Perón. This escalated things even further: Perón outlawed all the insurgent groups, and created the AAA (Anti-Communist Alliance) to seek and kill them.

Perón died of old age, and his wife became president. From there, things got even worse: Montoneros and ERP started bigger and bolder attacks, and the government signed a decree ordering the army to "anihilate the subversion". The economic policy of Celestino Rodrigo caused the highest economic crisis of Argentina up to that date, the "Rodrigazo". Isabel Perón, who was just a dancer and had no political experience of any kind before becoming president, was overwhelmed by all this. This led to yet another military coup, the National Reorganization Process.

Thanks to a constant change of doctrines according to the times, glorification of Perón and Evita as national heroes and a constant reinterpretation of its past that would put 1984 to shame, Peronism managed to stay as strong party in the national politics even to this day, whereas similar ones of its time have long faded into obscurity in their respective countries.