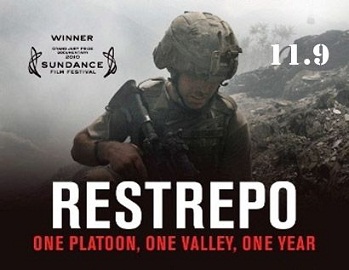 Though I walk through the Valley of the Shadow of Death, I shall not fear.
Advertisement:

From 2006 to 2010, the Korengal Valley in northeastern Afghanistan was considered the deadliest combat zone by American troops stationed there. The outpost there was consistently undermanned and insurgents, particularly the Taliban, were free to attack at will. 42 American soldiers and many more Afghans were killed in the "Valley of Death" before it was finally abandoned, written off as more trouble than it was worth.

One of the many units to rotate in and out of the Korengal was the 503rd Infantry Regiment. Sebastian Junger, a journalist, accompanied one of their platoons during their 15-month tour of duty and wrote a book based on his experiences entitled War. Restrepo is a film adaptation of the book that takes its name from the platoon's medic, Private First Class Juan Restrepo, who is killed in action soon after the 503rd arrived. His comrades eventually name an advance outpost, Observation Post Restrepo, after him.

The film takes a fly-on-the-wall perspective and follows the 503rd as they meet with the village elders, battle the Taliban, and participate in some dangerous and disastrous operations. Interspersed are interviews with the soldiers themselves as they look back on what they did right, what they did wrong, and how it affected them after they came back.