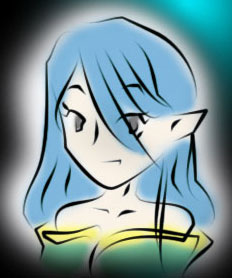 "Welcome to Aetheria, Traveller; a world with many tales to tell."
Aetheria Epics

was a webcomic in the style of a JRPG. It took place in a vast world called Aetheria which is divided up into various "realms", each having its own unique culture and level of technological or magical development. Aetheria is populated by several variations of fantasy race mainstays such as humans, mystics, ferals and mekanics.
Advertisement:

The twist of Aetheria Epics

was that it relied on its community of readers to make important character and story decisions by way of a daily vote. Theoretically, these factor into the character's overall personality, gradually solidifying it until their story is complete and another one begins.

The site launched in April of 2009, but daily updates were quickly cultivating an engrossing narrative as well as a decent-sized archive.

Like all webcomics that reference RPGs, this one's rather trope-heavy.

Some time before November 2013, it vanished from the Internet (having stopped updating for months before): For some time the website only contained the Dreamhost default page, and now it's is no longer reachable at all. However, a fan has reposted the pages on Reddit