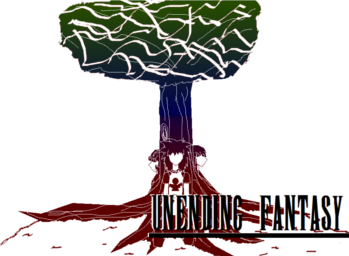 The official logo of the first arc of the comic, UNENDING FANTASY
Advertisement:

A webcomic hosted by ComicFury, it is (at first) based upon the story of Brad Bunstead, a 14-year-old American gamer who moved to Japan. The comic follows his exploits.

The game within the comic takes its cues from the Tales series, Final Fantasy, and othersuch titles from Japan.

The plot of this videogame is supposedly being moved by the creator of the comic, who serves as the player of the game as well. It has been decided that there are to be an as of yet undetermined number of arcs in the series. The first is the current arc, ''UNENDING FANTASY. The names of the arcs remain secretive, but it has also been decided that they will focus on all the members of Brad's party in groups of 1-3 people at a time.

the forum can be found here