Film / Of Dice and Men 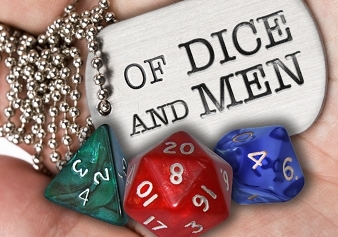 A 2014 independent dramedy film produced by Cavegirl Productions, based on the 2011 play of the same title by Cameron McNary. Set in 2006, it concerns a group of thirtyish Tabletop RPG gamers reacting to the announcement that one of them has enlisted in the Marines and is going to Iraq.
Advertisement:

Jason's announcement that he has enlisted throws the group into turmoil. John Alex picks a fight with Jason because he can't express his concern any other way, and John Francis starts to question the point of gaming at all. They only have one last game session before Jason's deployment to heal the rift in the group.

Of Dice and Men provides examples of the following tropes: