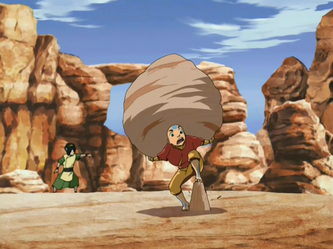 Aang begins his earthbending training under Toph.
"What's there to tell? I threw some rocks at the Avatar, he got all whiny, and Sokka fell in a hole."
— Toph, recapping the episode 74 years later

In the aftermath of the previous episode, both groups of main characters take time to recuperate. Zuko aids Uncle Iroh in recovering from his wound at Azula's hands, and Iroh tries to teach him to generate lightning; when Zuko is unable to achieve the necessary mental calm, Iroh instead teaches him a technique to redirect lightning, which he invented by observing Waterbenders. Aang also begins lessons, learning Earthbending from Toph. It's very difficult for him because Earth is an Airbender's polar opposite; Airbenders go with the flow by nature, while Earthbenders tend towards directness and stubbornness. Thus, the title of the episode refers to both Aang and Zuko struggling to master attitudes and techniques that are psychologically and elementally opposite to their normal mindsets.

Meanwhile, Katara continues some of Aang's training as a counterpoint to his difficulty with Earthbending, whilst Sokka carries on the meat-and-sarcasm tradition by trying to hunt a baby sabretooth moose-lion.