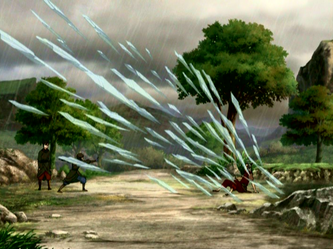 Katara, with Zuko's help, confronts the man who killed her mother.
"I'll never forgive him. But I am ready to forgive you."
Advertisement:

Our heroes are woken explosively by the arrival of a fleet of Fire Nation airships, with Azula at their head. Zuko buys time by facing her one-on-one, completing his integration into The Gaang, who now seem to have no further reservations about his presence; he even jokes about chasing Aang around for old time's sake. Only Katara continues to resist, explaining that she won't forgive him and the Fire Nation for all they've done.

That night, Zuko goes to Sokka for advice and is treated to a Flashback of how their mother Kya was killed during a Fire Nation attack on the Southern Water Tribe. The next morning, Zuko offers to help Katara hunt down those who slew her mother. Sokka and Aang are hesitant, the Avatar in particular stressing that forgiveness and not violence will bring peace, but when Aang discovers Katara preparing to steal Appa if necessary, he relents and lets them go.

Using Zuko's knowledge of Fire Nation communication channels, they identify the division which was responsible for Kya's murder, The Southern Raiders. From there, they track down the group's retired captain, Yon Rha, who now lives with his overbearing mother. Upon being confronted with this vengeful Waterbender, he expresses incredulity: he was dispatched to the Southern Water Tribe to kill their only living Waterbender, which Kya claimed to be. Katara prepares the killing blow... only to stop at the last moment. As much as she hates him, she just can't do it.

Back at the camp, Katara admits that she couldn't bring herself to kill Yon Rha to Aang with him telling her how proud he is that she was able to forgive and that it will help her heal. However she shakes her head, saying coldly "I didn't forgive him. I'll never forgive him." Katara then turns to Zuko and says "But I am ready to forgive you," before hugging him, finally allowing the two to become friends. Zuko tells Aang that he was right and violence wasn't the answer for Katara and the Avatar tells him that it never is.

However Zuko has only one question to that: what is Aang going to do when it's time to face the Fire Lord?

Sokka was clearly expecting someone else to enter the tent.

Example of:
Ready for Lovemaking

Sokka was clearly expecting someone else to enter the tent.