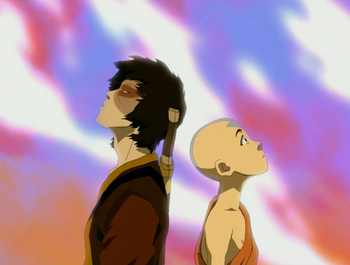 Aang and Zuko are deemed worthy enough to learn the true and harmonious way of firebending.
"I understand."
Advertisement:

Having been accepted by the Gaang, Zuko begins to teach Aang firebending, only to discover that his own firebending has gotten weaker. Realizing that the Fire Nation employs a corrupted version that emphasizes hate and rage, Zuko takes Aang to visit the ruins of the ancient Sun Warrior civilization, where firebending was originally invented, in the hopes of getting back to basics.