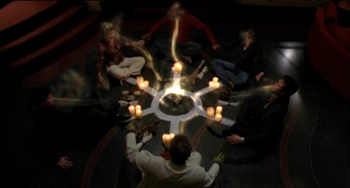 After his rendition of "The Way We Were", Lorne addresses an unseen lounge audience, narrating the conversation that Angel and Cordelia had begun just as the previous episode ended. Cordelia questions whether she and Angel were in love, and Angel is uncertain. Cordelia just wants to remember who she is. Lorne arrives with the answer: a bottle containing a memory-restoration spell, which Cordelia is eager to try. Wesley arrives, having been asked by Lorne to help with the spell while testing a stake weapon on his right arm, and has an awkward meeting with Fred. She vaguely informs him that her mission was completed, as Gunn realizes that Wesley helped Fred try to kill her professor. When he confronts Wesley, he also threatens Wesley to not pursue Fred, but Wesley tries to dismiss the issue, even triggering the stake on his collapsible sword. Gunn asks what happened to him. Wesley reminds Gunn that "I had my throat cut and all my friends abandoned me." The gang hold hands in a circle around the bottle as it starts to spin. The spell disorients everyone; Lorn passes out and the others stumble about the lobby as if very high on mushrooms. Cordelia suddenly panics and smashes the bottle with her boot. She starts on a tirade about kidnapping and sophomore pranks, as she has mentally regressed to when she was the most popular girl at Sunnydale High; Wesley believes he is still a student at the Watchers Academy, Gunn is once again a rebellious street kid, Fred is transformed into a younger and insecure pothead, and Angel has reverted to his pre-vampire self - a frightened Irish teenager from 1753 named Liam. While Liam wonders what happened to his Irish accent, saying its the devil, the rest of the gang question what brought them together and what they should do to solve the mystery of their current situation. Gunn and Wesley butt heads on plans and when Wesley tries to demonstrate his toughness with a karate demonstration, he unintentionally activates the stake weapon up his sleeve. When Gunn and Fred find Lorne passed out behind the counter, they are shocked to see a demon. Liam restates its the Devil. Meanwhile, Connor saves a young woman from two vampires. The woman offers her body in repayment, but only if he pays $50.

Back at the hotel, Wesley duct tapes Lorne to the seat in the lobby while arguing with Gunn over whether to cut Lorne's head off or torture him for information. When Cordelia asks why they're not freaking out about wooded stakes or the sight of a green man with horns, Wesley and Gunn both reveal that vampires and demons are real and they both have experience with them. Fred examines an unconscious Lorne while Wesley shares his theory that they're being kept in the hotel with a vampire as a test. They all start to wonder why they don't look 17 like they feel, and collectively decide to hunt for the vampire that will supposedly set them free once they kill it. Cordelia and Liam team up and go one way while the other three head in the other direction. Liam struggles to adjust to this strange world that is hundreds of years beyond his life, Cordy tries to comfort him. But while she turns away, Liam vamps out and much to his own surprise, realizes that he's a vampire and he will be killed if the gang finds out.

Liam tries to leave the hotel, but freaks out when he spots the cars on the street and rushes back inside to escape the shiny "demons." As the group regathers in the lobby, Wesley introduces a new theory: the vampire may be one of them. He passes a cross around the group, but when it finally reaches Liam, he manages to hide his smoking hand until a distraction develops. Lorne wakes up, his memory unaffected, and identifies Liam as a vampire. Liam punches Lorne and is knocked out again. A fight breaks out between Liam, Wesley and Gunn, and the girls run in separate directions. Liam catches Cordelia, who screams loudly, drawing a lurking Connor out of the shadows. Liam rants to Connor about fathers as the two fight, while in the lobby, Lorne convinces Fred to release him, and he mixes together a concoction to restore their memories.

After treating the others, Lorne puts a touch of the mixture on Cordy's tongue. She pauses for a second before running off. Lorne tells the audience that, although they didn't know it at the time, when he restored Cordelia's memory at the same time something powerful and evil woke up...

Cordelia reveals to Angel that she remembers everything. He asks her the same question she asked him earlier that evening: Were they in love? She tells him they were and walks off, leaving Angel behind. Lorne then walks off the stage, and the camera reveals an empty Lounge.