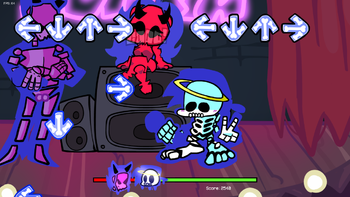 Friday Night Funkin' X-Ray Mod is a Friday Night Funkin' Game Mod series that changes the characters' sprites and icons into an x-ray version of themselves, based on the game over screen of the original gamenote More specifically, Girlfriend's skeleton from Week 7's "Stress" game over screen. It was created by Kaechii and was released on GameBanana in May of 2021, which was only weeks after Week 7 of the original game came out. The mod had its humble beginning as separate reskins from late April to early May before spawning into a full-on mod compiling all the skins and eventually ended up as a series.

The plot is about the same as you would expect from a re-skin of Friday Night Funkin'. Set within an Alternate Universe where everyone is inexplicably an x-ray version of themselves, X-Boyfriend (yes, there's a naming pattern now) wants to spend time with X-Girlfriend, but can't help but get into a rap battle every week, whenever he challenges others being rap-happy as he is, or his opponent came forward to challenge him. Not only does this mod change the sprites, but it changes the background and overall context of the weeks (or at least the ones with dialogue). Like with Friday Night Funkin' Minus, it also tends to take creative liberties with the skeletons, such as making Boyfriend an angel or Ruv a demon.

The currently released/known installments include:

This reskin provides examples of:

X-Sarvente: *sigh* Thank you. Ah- I have to go now- uh- please don't forget to come over-