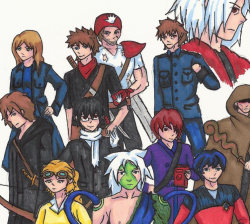 Some of the characters in Endless Time.
"Those old fools who run those nations... What do they know about rule? They simply think that if they sit there and collect taxes, they are a good ruler? Hah! When we take over, I will show them what a true ruler is capable of..."
King Thereme

is a Forum Role Play on Ace Attorney Online.