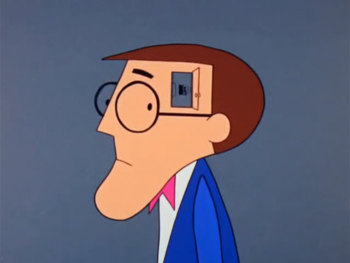 "The only thing he can't handle
Are the hang-ups in his mind!"
There's someone, you've got to meet him
And you see him everyday
His face will look familiar
But in a most unusual way

Norman Normal is a 1968 short by Warner Bros. and Seven Arts, produced by William Hendricks and N. Paul Stookey (of Peter, Paul and Mary, who also provided voice work and wrote and performed the short's theme song), and directed by Alex Lovy. Rather than being a part of the Looney Tunes or Merrie Melodies line, it was billed as a "Cartoon Special".

The short revolves around a typical day in the life of Norman, a completely ordinary businessman who works as a salesman for a ball-bearing company, as he leads the viewer through a series of doors that seem to represent his memories. He gets pressured by his boss into using unscrupulous sales tactics, ignored by his stuffy father when Norman goes to him for life advice, and mocked by his so-called friends at a cocktail party. Norman mostly keeps it all in his head, though... quite literally, as we find at the end of the cartoon.

Despite its cult following and better reception over the other Seven Arts shorts, this cartoon is rarely aired on TV though not because of any controversial content (violence, racism, etc.). The reason why is because Warner Bros. never designed the cartoon to interest children. Its limited exposure on television led to it being one of the rarest of all Warner Bros. cartoons along with Injun Trouble (1969) owing to the unpopularity of the shorts produced during this period. Despite this, it saw some airtime on Nickelodeon in the late 80s and early 90s and it was eventually released on the sixth Golden Collection DVD becoming the first short from the Seven Arts era to achieve this feat.