Western Animation / A-Haunting We Will Go 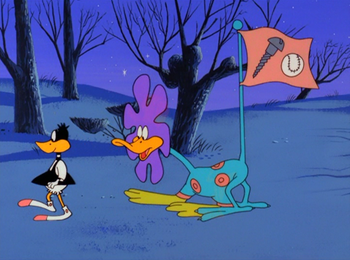 A-Haunting We Will Go is a 1966 Looney Tunes cartoon featuring Daffy Duck, Speedy Gonzales and Witch Hazel directed by Robert McKimson. Set on Halloween night the plot begins with Daffy’s nephew calling to Witch Hazel's house while out trick-or-treating on Halloween night and trying to convince his uncle that witches are real to which Daffy insists they're not. Meanwhile Witch Hazel, stuck in a rut, decides to take a vacation, but not before leaving her resident mouse Speedy in charge of her shop using a spell to turn him into a clone of her. But things get complicated when Daffy turns up.