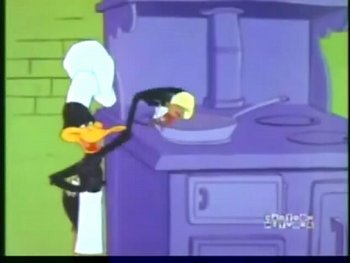 If I didn't know better, I'd say he was trying to cook me. But nooooo, he is no gato. He wouldn't. ...or would he?
Advertisement:

Daffy owns a food stand in the middle of Mexico that serves nothing but "mouseburgers"note hamburgers made with mice instead of beef. Because he's running a small business on a tight budgetnote in a clearly poor region of Mexico to boot, he uses fake rubber mice with a ton of flavoring addednote namely chili peppers, hot sauce, axle grease and DDT. However, when a nasty bandito cat named El Supremo catches on to the ruse, he demands a real live mouse from Daffy. As Daffy ponders the tough spot he's in, such a mouse (Speedy, of course) miraculously comes to his kitchen's backdoor. Thus, starts the chase.

Tropes Associated With This Cartoon: