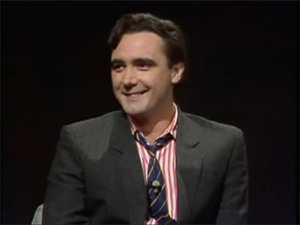 Tony in his heyday on Whose Line.
Advertisement:

Anthony Declan James Slattery (born 9 November 1959) is a comedian and actor still best known for his appearances on the early UK series of Whose Line Is It Anyway?. In the '80s he was in the Cambridge Footlights alongside Stephen Fry, Hugh Laurie and Emma Thompson, and went on to be ubiquitous on TV panel shows and the like. However, his career was curtailed in the mid-'90s by a nervous breakdown, caused by undiagnosed bipolar disorder for which he self-medicated with drugs and alcohol.

Despite recovering and going on to work on a variety of shows and films (including Kingdom (2007) in 2007-8), today he is rather obscure; if you hear him mentioned in modern Britain it will usually be at the end of the sentence "Whatever happened to Tony Slattery?" His partner is actor Mark Michael Hutchinson.