Series / This Is David Lander 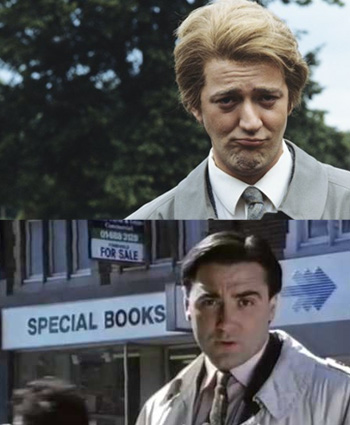 David Lander, a parody of investigative journalists, first appeared in the BBC Radio 4 comedy series Delve Special. In 1988 the character moved to a six-part TV series on Channel 4 - the adaptation still starred Stephen Fry and was still written by Tony Sarchet, but was renamed This Is David Lander.

When the second series came to be made in 1990, Fry was too busy to film it, and so Tony Slattery was cast in his place. Slattery's incarnation of the character was renamed David Harper, and his six episodes ran under the title This Is David Harper, but they are for all intents and purposes the same. (On this page Fry's series is referred to as S1 and Slattery's as S2; unless specified, tropes apply to both Lander and Harper equally.)

Both Lander and Harper are painfully earnest Intrepid Reporter types who pull the thread of a different story in each episode, typically placing themselves in harm's way to do so. Most of the comedy derives from the scandalously corrupt and stupid people under investigation, many of whom turn violent or simply run away when faced with a camera and a blunt question.

Alternative Title(s): This Is David Harper