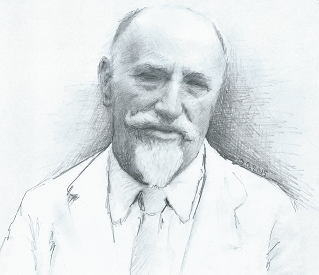 Feliks Karol Koneczny (1862-1949) was a historian and a journalist, but what he's best known for (and incidentally, what's most tropish about his work) is the theory of civilisations he developed.
Advertisement:

Worldbuilders can find the details in On the Plurality of Civilisations (foreword by Arnold Toynbee). We only provide a short digest here.

A civilisation is a method of organising a community's life, encompassing all the practical and axiological aspects of it, like whether it has clans or nuclear families, the intricate details of law and how it relates to ethics (very important!), how communal the community is, and so on.

Of course, there are hundreds of possible civilisations. Ancient Greece alone had several, although it's hard to tell exactly, because, unlike ceramics and weapons, laws don't leave much archeological evidence note Koneczny himself mentions at least three: attican (Athens - what you probably think of when hearing the phrase "Ancient Greece", since they were the Greeks who wrote the most - Socrates and Plato belong here), spartan and macedonian, which resembled republican roman more than it did other Greeks. The syncretic hellenistic civilisation was a late, Alexander the Great-era development. Some civilisations die out (like spartan or republican roman, although this one sort of survives in the latin civilisation), some last for a really, really long time (the jewish civilisation is circa 6000 years old and going strong). There's no law to this.

Oh, and when two civilisations meet beyond occasional trade, you get Values Dissonance of epic proportions, obviously. If civilisations try to meld together, Apathetic Citizens inevitably result, because of all the confusion (one says eg. Be Yourself, the other shouts Conform! - what's a poor guy going to do?). If the civilisations are too far apart to even try melding, the more advanced one (that is, the one demanding more effort from its members) usually gets squished by the less advanced one. The advanced one may also split, as was the case with the roman civilisation, even on the same territory (a staunch republican Cato and very imperial Julius Caesar lived alongside), with the less advanced one getting to rule (more or less oppresively).

All civilisations have laws - sometimes just the word of the ruler. They also have the basic concepts of ethics: duty, selflessness, responsibility, justice, conscience, attitude towards time note i.e. is lateness disrespectful? does the concept of lateness even make sense?, attitude towards work note i.e. is it right to only do as much as you have to, or should you work your hardest?. These concepts mean different things in various civilisations: "duty" is always "what you ought to do, because not doing it is immoral" but what exactly your duty is varies.

Apart from ethics and law, the most visible difference between civilisations is their treatment of the five basic values: spiritual Truth and Good, spiritual/physical Beauty, physical Health and Wealth. For example, the attican civilisation tended towards Beauty Equals Goodness equals Truth - but pursuit of Wealth for itself was ridiculed. All the values are important, though - neglecting one negatively impacts your ability to recognise and pursuit the others (For Science! tends to require money and health, for example).

Civilisations tend to be tied to at least one religion (although sometimes religions turn out to fit another civilisation better: Buddhism has mostly migrated out of its civilisation of origin, the brahmin, into the chinese and tibetan). Their connection to places is less important - you simply need somewhere for the people to live and build their society, which at least at the beggining usually is a specific state. Within a civilisation, varieties called cultures arise (and fall): for example arabian civilisation used to have the cordoban culture (in Spain), which was still arabian, just with some local flavour. It had the potential to split off, but didn't.

The arabian, brahmin and chinese civilisations were not described by Koneczny in much detail, possibly because their members are not found in Poland in significant numbers. There are also numerous (Koneczny never claims to know how many) civilisations with smaller numbers of members, like tibetan (very distinct from the chinese) and however many of these exist in Oceania and Amazonia (Koneczny doesn't have the sufficient data to tell much about these, but wherever two people meet, there must be some civilisation - on the other hand, small, isolated communities can potentially become very different from anyone else, so there's that).

Some of the books by Feliks Koneczny: