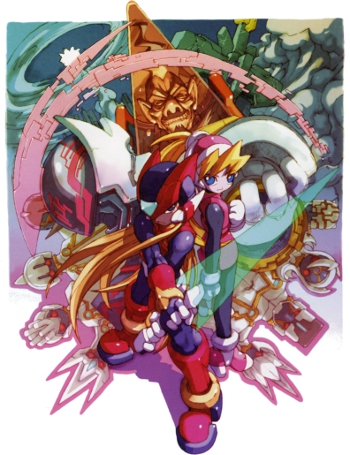 "I never cared about justice, and I don't recall ever calling myself a hero... I have always only fought for the people I believe in."note Clockwise from the top: Dr. Weil, Ciel, Zero, and Omega, with Weil's Numbers in the background.
Advertisement:

Another entry into Capcom's popular flagship Mega Man series, a Darker and Edgier direct Sequel Series to Mega Man X for the Game Boy Advance that continues the story of Zero, X's partner and best friend.

The series lasted for four games, the first in the franchise to be given proper closure. It would spawn a sequel series, Mega Man ZX, which currently stands at two installments. A Compilation Rerelease of the entire saga has also been released for the Nintendo DS. Inti Creates later went on to develop Azure Striker Gunvolt, a spiritual successor to the Mega Man Zero series, and as their first independent video game series. Another compilation re-release, aptly named Mega Man Zero/ZX Legacy Collection, was released in February 25, 2020 for PlayStation 4, Xbox One, Nintendo Switch, and PC through Steam, bringing the entire Zero and ZX series into one package along with new beginner-friendly features in the form of a Casual Scenario mode and a Save-Assist ability, optional CRT and smoothing filters, the Japan-only e-Reader Mod Cards for Mega Man Zero 3 and Dual-Slot feature from Mega Man ZX implemented, a collection of music and artworks from both series, and a new Z Chaser mode where players can race against one another to quickly clear stages.

open/close all folders
Tropes A to H
Advertisement:
Tropes I to P
Tropes Q to Z
Feedback