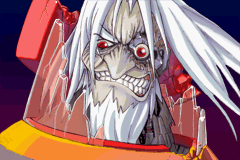 "I live! You'll need to do more than that to kill me!"
The Mega Man Zero series is much darker than the Classic series or even the Mega Man X series of games, because the plot revolves around racist genocide and has one of the biggest monsters in gaming history as the main villain and the one responsible for the Crapsack World the series takes place in.
Advertisement: