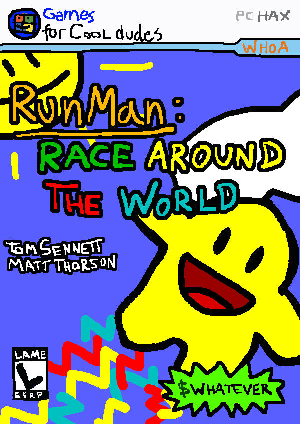 Run Man is the man who runs, streaking by with yellow buns.
Advertisement:

In this Platform Game, someone has announced a race around the world, and the fastest man in the world (a small yellow guy named RunMan) enters. All of the other competitors immediately resign, knowing that there's no way that they can beat him. RunMan is a bit annoyed by this lack of sportsmanship, and vows to race around the world by himself, if he must.

Over the course of the game, you'll bounce off walls, ride a hang glider, and out-run certain death on more than one occasion.

Technically a Freeware Game, but donations of any amount are openly invited.

Can be found at this rather clever URL: http://whatareyouwait.info