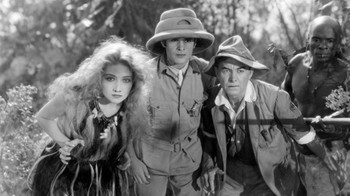 Aloysius "Trader" Horn is, well, a trader, an old veteran of Africa with much experience cheating the natives by giving stuff like salt and copper wire in exchange for priceless ivory and valuable furs. He is bringing along Peru, the young son of his late former partner, and teaching Peru the ropes of exploring and trading with the natives. Also on the expedition is Horn's employee Rencharo, a native who acts as The Lancer, and a team of native porters.

They note that The Natives Are Restless, and after they're attacked when attempting to make camp by a riverbank, Trader elects to take the whole party back to base camp. However, on the way back downriver they run into Olive Trent, a missionary. Olive's daughter Nina was lost twenty years ago when the Trents were attacked by a party of natives that killed her husband. Olive has spent twenty years hunting for Nina, and now has a solid lead, information that Nina is alive and with the Isongi tribe upriver, north of Opanga Falls.

Horn elects to turn his party around yet again and follow Trent at a distance. Eventually they find her at the falls, dead, whether by accident or murder undetermined. They decide to honor Olive Trent's last wishes, and go deep into the unexplored jungle looking for Nina. Sure enough, they find her—and some unpleasant surprises.

As one might guess about a film made in 1931 about Darkest Africa, Trader Horn comes with a big heaping dose of Values Dissonance racism. “Horn, you’re mistaken about these people. They’re not savages! They’re just happy, ignorant children,” is a representative line of dialogue. Besides the racism, this film is remarkable for being shot on location in Africa, one of the first feature films ever to be shot on location in Africa or anywhere else. It resulted in a Troubled Production that ran for over a year and cost a fortune. Two crewmen were killed by African wildlife. Edwina Booth, who played Nina, caught malaria during filming. The illness destroyed her film career, leaving her unable to work for years, but she did win a $50,000 settlement from MGM. Despite the troubled production the film became a huge hit.

Remade in 1973, with Rod Taylor in the title role.