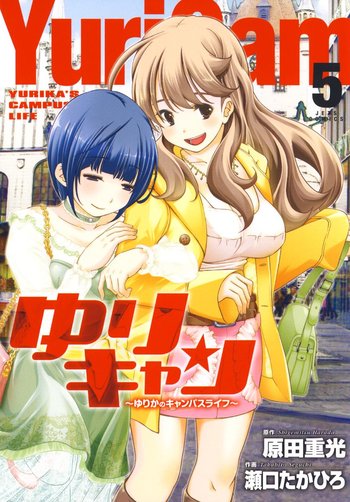 Replace the protagonist on the right with any straight man or lesbian and you got the ultimate harem dream.
Advertisement:

Yurika's Campus Life (Yurika No Campus Life) is a five-volume manga created by Harada Shigemitsu and Seguchi Takahiro which caters to the Yuri Genre and Ecchi-lovers. It was serialized in Young Animal from 2010 to 2013.

Yurika is already unlucky enough to be stuck with the rumour of sleeping with over half of the 10,000 attendees in Hakusen Women's University, a girls-only college with a long history of lesbian love. This rumor is incredibly mortifying to Yurika and seriously damages her chances of ever getting a boyfriend. Not that it matters because, for some unexplained reason, she's completely irresistible to women regardless of sexual orientation whilst simultaneously turning off all men who had ever laid their eyes on her.

As if her life couldn't get any worse, Yurika gets a call from her Dad to let her know that his company went bankrupt. He then suggests prostituting herself around her university by charming the way into women's hearts. She obviously objects to this but without a reliable source of income and no other option, Yurika milked her money's worth of her unwanted persona as a masterful lesbian lover.