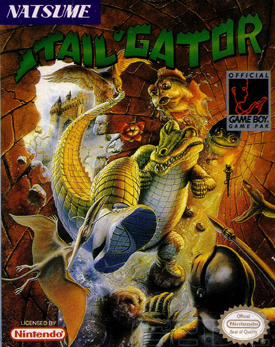 Tail 'Gator (a.k.a. "Shippo de Bun" in Japanese) is a 1991 Game Boy game developed and published by Natsume (with involvement from VAP in Japan). It is sometimes named "Crocodile" in unofficial translations.
Advertisement:

It is a platformer with ten levels, starring an alligator named Charly who must defeat a dragon named Basso Gila who has made his new home in the formerly peaceful animal kingdom called Moberry.

There are fourteen levels, divided into five areas. Areas 1, 2, and 3 put you in a level select room where you have a choice of four levels—depending on which door you enter from the first room, you get a different level. Areas 4 and 5 are one level each, ending in the final boss. There are bosses in one of the Area 1 levels, one of the Area 2 levels, two of the Area 3 levels, and the Area 5 level. Each of the four door-heights has a corresponding music track to go along with it—all the top doorway levels of Areas 1-3 have the same track, for example. Areas 4 and 5, the castle, have a different track.

Gameplay: Platforming. Lose a heart when hitting an enemy, collect hearts to replenish H.P.; game over if you run out. Also collect P tabs to fill up the power meter—if it's full you get a ranged shockwave attack with every tail whip. B circle just gives bonus points, but bombs destroy all enemies on screen—more points the more you hit at once. Finally, there are keys. Each level is made up of a number of rooms: You must destroy all the treasure chests (three tail-whacks) to find the key, which lets you go to the next room.