Video Game / The Sword of Hope 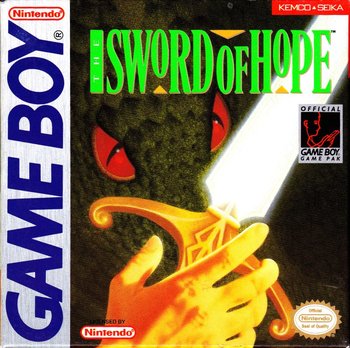 The Sword of Hope (1989) and its sequel, The Sword of Hope II (1992), constitute a series of first-person role-playing games (named Selection in its native Japan) developed by Kemco for Nintendo's Game Boy. The interface is similar to the MacVenture NES ports which were published by Kemco as well. It is mostly remembered for its lacking localization and Nintendo Hard levels of difficulty, but contains a pretty elaborate plot and game world for its era. The second game has been re-released on the Nintendo 3DS eShop, but the first has not for some reason.

In the land of Riccar, a good decade before the events of the game, the good king Hennesy was influenced by the power of an evil dragon that had been sealed away to prevent destruction of the land a long time ago. With promises of power and prosperity, the dragon successfully convinced him to release the seal; once freed, the dragon summoned the evil powers of Mammon to cover the land in darkness, and turn its people into trees. All hope seemed lost... until the birth of Theo, the king's heir.

The king, now completely under the dragon's control, saw on his son a birthmark that showed he was fated to bring hope back to the people, and attempted to have him killed. A knight under the king's employ, Pascal, rescued the prince and took him away with him into the forest. Three magicians then sealed Riccar castle underground, waiting for Theo to come of age and fulfill his destiny of retrieving the Sword of Hope and defeating the evil dragon. And so, your quest begins...

Tropes associated with The Sword of Hope: