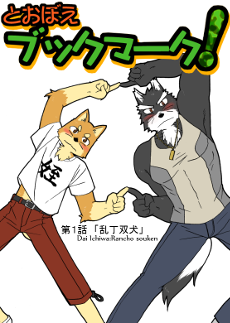 is a Furry Webcomic by Kemono artist cotton. Although all of the main characters are gay and many jokes and sexual references are made, the comic is kept safe for work.

The story follows Sousuke Natsume and Nitobe Tetsuru, who wake up one day to find their bodies being swapped for an unknown reason, and their friends Fukuzawa Yukihide and Noguchi Tadashi. Natsume and Nitobe try to resume their normal activities despite the swap, although their largely different personalities lead to some problems with this. In addition, Natsume and Nitobe are in love with each other, but neither want to admit it out of fear that they would be rejected. In addition, Noguchi is in love with Nitobe as well. Although the comic has a strong focus on the romantic relationships of the characters, it does begin to develop a deeper story as the characters look into Nitobe and Natsume's body swap.