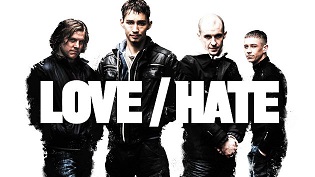 The gang. From left to right: Fran, Darren, Nidge and Tommy.
Advertisement:

Love/Hate is an Irish drama series broadcast on RTÉ. It centres on a criminal gang in Dublin and their various dealings.

Darren Treacy returns to Dublin after a spell in Spain in hiding to meet up with his brother, Robbie, as he's released from prison. Unfortunately, Robbie catches a fatal dose of 9mm rounds and Darren is determined to find his killer. At the wake, he meets up with his ex-girlfriend, Rosie, and rekindles his relationship with her, despite her being in a relationship with Stumpy and pregnant with his baby. During this time, Nidge proposes to his girlfriend, Trish, and marries her in the series finale, though the wedding reception is nowhere near as smooth as hoped. Darren does eventually discover that John Boy's brother, Hughie did it to save face, Though he accidentally shoots himself before Darren can confront him. Darren himself is shot, ending the series on a cliffhanger.

Series two shows that Darren has physically recovered, but is haunted by nightmares brought on by PTSD, and is now working for a low level loan shark and bootlegger by the name of Fran until he takes pity on one of Fran's debtors and beats one of his attack dogs to death to protect him. Meanwhile, John Boy is becoming increasingly paranoid with the Criminal Assets Bureau on his case constantly, seizing his assets left, right and centre. Desperate to avoid Fran's wrath, Darren seeks help from John Boy to clear his debt, on the condition that Darren does any job he sees fit. Suspecting a rat in his gang, he sends Darren to kill Stumpy, which Darren does willingly. Tired of seeing John Boy abuse his niece (and Tommy's girlfriend) Siobhan being forced to carry packages on flights, Nidge enlists Darren's help to off John Boy and take over his criminal empire. However, Rosie suspects the truth and leaves Darren, knowing that he is nothing but a stone killer.

Series three involves conflict between the gang and the IRA, with Tommy and Darren killing a high-level IRA man after he rapes Siobhan.

The fallout of the events of series 3 lead to Nidge in hiding at the beginning of series 4, spending very little time at home with the IRA still on his trail. Tommy is implied to be suffering brain damage and ends up being a liability on a Tiger kidnapping. Dano and Lizzie are searching for Nidge in revenge, with Lizzie developing into a Dark Action Girl. Meanwhile, the gardai are becoming more prominent in the series as they investigate.

Series 5 follows on soon after series 4 with Nidge taking on a loan from an Irish expat mobster living in Spain and a falling out with a gang of Irish Travellers. Most of the cast either wind up dead, incapacitated or incarcerated by the end.