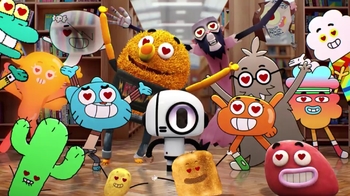 Darwin: Well, love is in the air. It's in your heart, in the eyes of others. It's in the way people touch, the way people talk. And it's all over the universe.
Bobert: If I understand you correctly, you have narrowed the definition of love down to everything and everywhere and everyone.

Gumball and Darwin help Bobert learn what love is, which turns into a Vignette Episode showing the trials and tribulations of love.