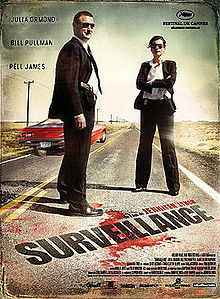 Surveillance is a 2008 thriller film by Jennifer Lynch, daughter of David Lynch, involving two FBI agents, Hallaway (Bill Pullman) and Anderson (Julia Ormond), investigating the three survivors (Ryan Simpkins, Kent Harper, and Pell James) of a roadside bloodbath. Over the course of the three interviews, a story unfolds where nothing is quite as it seems. The movie was known for being Jennifer Lynch's second film in fifteen years, after Boxing Helena, but also for winning the Festival de Cine de Sitges in October of 2008.

The film exhibits the following tropes: