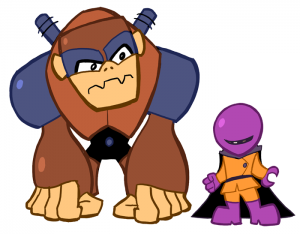 "What's the point of not saying things out loud?"
Advertisement:

Dexter and Monkey Master is a television series created by David Willis, based on his comic series The Head Aliennote both of which only exist within the continuity of Dumbing of Age. It follows the adventures of Dexter the Head Alien, a megalomaniac dictator from a distant world, and his beleaguered robotic henchman Monkey Master. It also featured a tie-in comic series from MKG that started in conjunction with season 3.