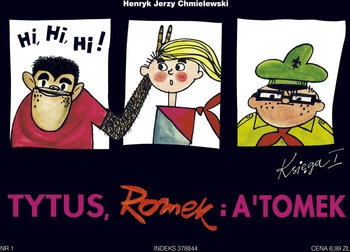 Tytus, Romek i A'Tomek (often simply called "Tytus" for short) is a popular and long running Polish comic and one of the few Polish comic book series running during the communist era. It was created in 1957 by Jerzy Chmielewski (nicknamed Papcio Chmiel) who drew and wrote every single Tytus story up to 2009 (31 volumes, and 10 special issues in total). The stories were originally published in "Świat Młodych" Magazine for many years before they were printed in book form (some were completely remade).

It centers around Tytus de Zoo, a talking chimpanzee, and two boy scouts named Romek and A'tomek, who have the mission of "Uczłowieczyć" ("humanizing") Tytus, which more or less means educating him. Other recurring characters include the omnidisciplinary scientist, Professor T. Alent and the creator himself Papcio Chmiel, who often help out the main characters on their adventures. While the adventures often involve science-fiction elements, the world presented in the stories is incredibly absurd, fourth-wall breaking and over-the-top nonsensical.

The dialogues often feature a unique mix of youth slang, slang from pre-World War II Poland, words from other European languages as well as Chmielewski's humorous neologisms which contain political themes and satire.

It received an animated film adaptation in 2002, Tytus, Romek i A'Tomek wśród złodziei marzeń ("Tytus, Romek and A'Tomek Among the Wish Thieves"). There was also a Platform Game adaptation of dubious quality. In 2017, the three protagonists started appearing in advertisements for the Polish branch of Media Markt.