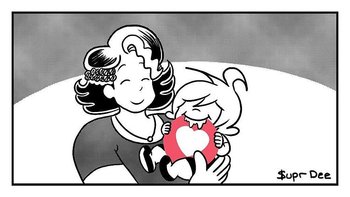 The strip has so far gone through three different incarnations. The first was published on DeviantArt and was very different (Kurami, for example, was much older), and is now considered an Old Shame. The second, simply titled Kurami, was published on Facebook and in Dee's local newspaper starting in April 2015, making it a rare example of a webcomic becoming a Newspaper Comic - in this incarnation, Kurami was blind, Ana was a plus-size fashion designer, and they were cousins rather than mother-and-daughter.

The third and current incarnation began in May 2016, acting as a Retool designed to make the strip more accessible to new readers. The series came to an conclusion in October 2017, but in March 2019, $upr Dee announced a direct sequel subtitled "Ana-Thing's Possible", to be published online. "Ana-Thing's Possible" began in November 2020, with simultaneous publication in a local magazine, and is due to run for at least five years.

Life With Kurami can be found here

, though its archive is still a work-in-progress. The page with the original Kurami strips was unpublished in May 2016, but as of August 2019, Dee has started re-uploading them to the new page, to fill the gap until Ana-Thing's Possible is released.

Gek Gek! (Tropes in Life With Kurami include:)

Tropes exclusive to the original Kurami include: